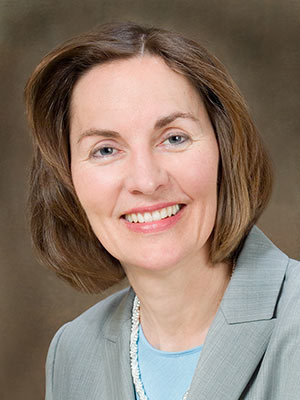 The Graduate School at the University of Notre Dame announced that Esther Takeuchi, distinguished professor of chemistry and material science and engineering at Stony Brook University, will address graduates at the Graduate School’s annual Commencement Ceremony, which takes place at 10 a.m. May 18 (Saturday) in the Compton Family Ice Arena.

One of the world’s leading energy researchers, Takeuchi is a member of both the National Inventors Hall of Fame and the National Academy of Engineering and earned the National Medal of Technology and Innovation in 2009. She is best known for her research on the lithium/SVO battery system used to power cardiac defibrillators, devices implanted in more than 300,000 people with ventricular arrhythmias annually. A chief scientist at Brookhaven National Laboratory, Takeuchi holds more than 150 patents and received her degrees from Ohio State University and the University of Pennsylvania.

"Takeuchi has had an immeasurable influence with her research on defibrillator batteries. It is work that is not only theoretically important, but also fundamentally impactful, restoring some normalcy to so many lives including, actually, my father. She embodies the idea that Your Research Matters, a foundational tenet of the Graduate School at Notre Dame, and she is a tremendous role model for all of us. I look forward to her sharing her wisdom and insights with our graduates,” said Laura Carlson, dean of the Graduate School at the University of Notre Dame.

During the ceremony, the University will confer 241 doctoral degrees and 590 master’s degrees, and present the following awards to faculty and staff devoted to graduate training:

Lauren M. Papp is the winner of the Distinguished Alumna Award. The Vaughan Bascom Professor in Women, Family and Community in the School of Human Ecology at the University of Wisconsin-Madison, Papp also serves as associate dean for research. A doctoral graduate of Notre Dame’s Department of Psychology, Papp is recognized for her innovative research on how intimate and family relationships shape a person’s development across the lifespan; her extraordinary commitment to student welfare demonstrated in both teaching and service; and her role as a leader in her field and at her institution.

Elliott T. Visconsi is the winner of the Dick and Peggy Notebaert Award. An associate professor of English who currently serves as associate provost and chief academic digital officer, Visconsi has long been committed to graduate education as a dissertation adviser, graduate instructor and co-founder of the “Global Dome,” a doctoral accelerator program. He is recognized with this award for his pioneering work in conceiving and overseeing the successful implementation of the online master of science degree in data science, which serves as a model for Notre Dame to emulate across disciplines and domains. Distinctive features include classes that are fully online but include in-person immersions that build the cohort; an integration of students from diverse backgrounds; a robust ongoing collaboration with AT&T; and the development of multimedia assets to support online teaching that are used for other campus courses and digital initiatives.

Vania Smith-Oka is the winner of the Director of Graduate Studies Award. An associate professor in the Department of Anthropology, Smith-Oka is a cultural and medical anthropologist who specializes in the effect of institutions (medical, economic, development) on the behavior and choices of marginalized populations. Smith-Oka is recognized for her pivotal work supporting the early cohorts of students in the new anthropology doctoral program, which will produce its first graduates this year. She is honored for her supportive efforts to open pathways for their careers that balance a commitment to their academic training with a commitment to their well-being.

Peter N. Wallensteen is the winner of the James A. Burns, C.S.C., Award. The Richard G. Starmann Sr. Research Professor of Peace Studies in the Kroc Institute for International Peace Studies, Wallensteen is recognized for his defining role in the foundational doctoral seminar on international peace research, in which he has taught every doctoral student in the program since its inception in 2008. The application of his formidable perspective as a researcher and his direct experience in peacebuilding make this course a transformational capstone experience. Wallensteen also holds an appointment as a senior professor in the Department of Peace and Conflict Research at Sweden’s Uppsala University.

Mariette Quinn is the winner of the Graduate Administrative Staff Member Award. The administrative assistant for graduate studies in the Department of Chemistry and Biochemistry, Quinn has initiated process improvements that have benefited applicants, admitted students and faculty alike. By sharing her innovations and working with graduate coordinators in other master’s and doctoral programs, she has facilitated the broad-scale adoption of best practices and technology, as well as fostered community among graduate staff across the colleges and schools.

In addition, the ceremony will recognize the recipients of the Eli J. and Helen Shaheen Graduate School Awards, which honor top graduating doctoral students in the divisions of engineering, humanities, social sciences and science.

Prateek Mehta from the Department of Chemical and Biomolecular Engineering is the recipient of the Shaheen Award in Engineering. Mehta is an outstanding researcher who focuses on the computational design of multifunctional catalytic systems for sustainable energy applications. He is recognized for his creative theoretical models that rationalize complex phenomena observed in catalysis experiments and guide the discovery of improved catalyst materials. Following graduation, Mehta will assume a prestigious research position in the Catalyst and Process Technology division at ExxonMobil Research and Engineering.

Luis Bravo from the Department of Romance Languages and Literatures is the recipient of the Shaheen Award in the Humanities. A celebrated poet and a scholar in the fields of Latin American literatures and cultural studies, Bravo is recognized for his singular contribution in unearthing and examining the literary case of the Uruguayan poet, artist and activist Ibero Gutiérrez. Distinguished in his program as a curious and engaged intellectual presence, Bravo is a scholar and professor at Universidad de Montevideo and the Instituto de Profesores Artigas Montevideo in Uruguay.

Marshall Allen Taylor from the Department of Sociology is the recipient of the Shaheen Award in the Social Sciences. An original and productive scholar of sociology whose dissertation focuses on nationalist movements in the United States, Taylor is already recognized as an expert in complex methods including computational text analysis and cognitive social science. A popular instructor of statistics courses who stands out for his willingness to collaborate, Taylor is working at the leading edge of emerging research concerns in the social sciences. He begins as an assistant professor of sociology at New Mexico State University in fall 2019.

Amanda Nicole Marra from the Department of Biological Sciences is the recipient of the Shaheen Award in Science. A biologist whose research explores the regulation of the developmental pathways responsible for the coordination of organ formation during embryogenesis, Marra is recognized for her research contributions, stellar publication record and leadership. Marra is now a postdoctoral scholar in cell and developmental biology at the University of California, San Diego.

Originally published by The Graduate School at graduateschool.nd.edu on May 1.