This week, University of Notre Dame graduate student Shreejan Shrestha travels to Dubai to showcase his work in the Global Grad Show, taking place Nov. 12-17. Organized in partnership with the Investment Corporation of Dubai, the Global Grad Show is Dubai Design Week’s signature event, featuring 150 innovative projects and inventions selected for their potential to improve conditions for a variety of communities. With participants traveling to the show from institutions such as Harvard, MIT and the Royal College of Art, Shrestha joins an international cohort of artists, designers and engineers applying creativity and talent in the service of the common good.

Shrestha, who is a third-year industrial design student in the Master of Fine Arts (MFA) program, is showcasing a piece called "Arclite." He describes his piece as follows: 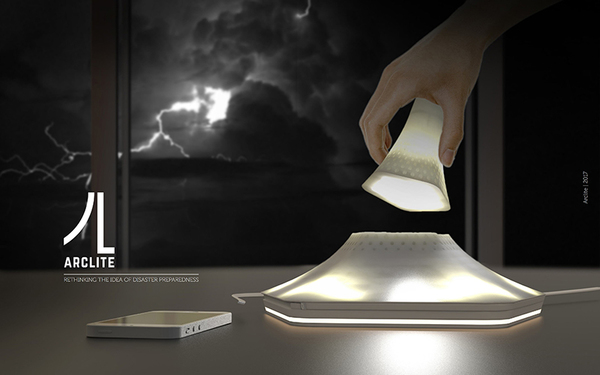 “Arclite is a light source and a power bank designed for electrical outages. The project rethinks the idea of disaster preparedness. It responds to the urgent need for light and mobile connectivity seamlessly in the hours and days after a natural disaster. Typically, Arclite functions as a hub for electrical devices. In times of emergency, the device’s function triples. Its stem detaches to provide a flashlight, while its base gives off ambient light and power for mobile devices — an urgent need for many during the upheaval and uncertainty of an extended loss of power. Arclite empowers families to secure and light their homes and connect to emergency services and loved ones during times of disaster.”

Shrestha’s design has widespread applications, but it was inspired by conditions Shrestha experienced firsthand both in the United States and in his home country of Nepal.

“The idea for Arclite was conceived last fall when I saw the suffering American cities went through because of hurricanes,” Shrestha explained. “After experiencing the terror and aftermath of a series of major earthquakes back home in Nepal, it was startling for me to realize the chaos and confusion created because of disasters is not limited to developing countries. For my ethnographic research I connected with a number of people directly impacted by these hurricanes in the Florida region and interviewed them remotely and got the firsthand insights.”

Shrestha’s vision aligns with the goals of the show’s curator, designer and writer Brendan McGetrick, who sees the Global Grad Show as an opportunity to promote the fusion of artistic creativity with social engagement and leadership.

“Global Grad Show is not only a showcase of ideas from the brightest young minds around the world, it is a celebration of creativity and optimism,” McGetrick explained. “Graduates today are faced with daunting truths such as climate change, automation and mass migration. Each of these projects offers a restorative solution, an idea of how to make human-scale changes with the hope of bettering humankind as a whole.”

Originally published by Nora Kenney at graduateschool.nd.edu on Nov. 12.