The Bowman Creek Educational Ecosystem (BCe2) has been awarded by the Indiana Department of Education for excellence in postsecondary partnership. Leaders of the program were honored at a ceremony in Indianapolis on Feb. 8 (Thursday).

The program’s beginning started in 2012 with a cleanup of Bowman Creek in the city’s Southeast neighborhood. A City of South Bend supplemental environmental investigative report found the creek was the most impaired tributary in the St. Joseph River and uninhabitable to marine life. Gary Gilot, who was serving as South Bend's public works director at the time, says the problems also spread beyond the creek. 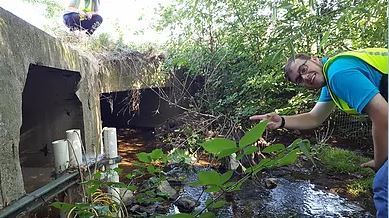 “You knew from day one there was more to this than just the creek,” says Gilot. “It is a neighborhood of concentrated poverty adjacent to the old Studebaker corridor.”

The Southeast neighborhood had been a bustling site for employees of the Studebaker factory, but after Studebaker closed its doors in 1963, the population dramatically declined. Fifty-five years later, only 2,500 of 10,000 residents remain.

The revival of downtown made it an appropriate time to capitalize on the resurgence in the area. Gilot and Jay Brockman, associate dean of community engagement and experiential learning at the University of Notre Dame, knew exactly where to begin.

“You start by rallying students and their infectious energy and enthusiasm,” says Gilot. 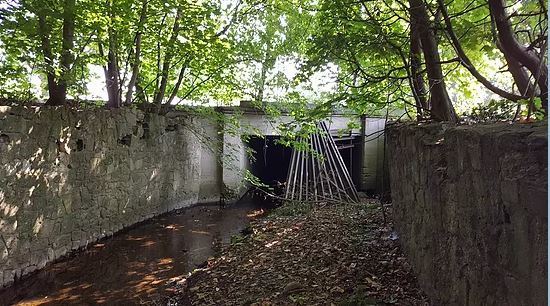 Faculty and students from local colleges and high schools brought their talent to BCe2 starting with the creek cleanup. Engineering students from the University of Notre Dame worked alongside students from Riley High School, home to the technology and engineering magnet program.

“Riley was naturally a part of the program since the creek goes underneath our parking lot and our practice football field,” says Matt Modlin, magnet coordinator at Riley High School. “We worked for a summer doing water quality analysis to try to get a baseline set of information.”

Students from the College of Engineering and the Center for Social Concerns at Notre Dame also designed a pedestrian bridge and surveyed the neighborhood on issues residents wanted to see addressed. By 2015, several interns from across the city started working with the program.

As cleanup efforts expanded, community partnerships began to grow. Representatives from Ivy Tech Community College, Indiana University South Bend, St. Joseph High School and more started to lend their expertise. There was a clear need to address neighborhood problems beyond the creek, but it was imperative that participants include the community on prospective projects.

“We do things with the community, not to or for,” says Boukdad. “We do not start a project until we see there is interest from the community or if there is a need for a certain task force to be working towards a solution.”

“Initially, the community was skeptical about a new organization in the neighborhood,” says Teague. “They had seen organizations make these big promises but they have never seen the results.”

Teague serves as a liaison to two other neighborhood organizations, 466 Works and SOAR, or Southeast Organized Area of Residents.

“The main thing is being an active, consistent presence in the neighborhood,” Teague says. 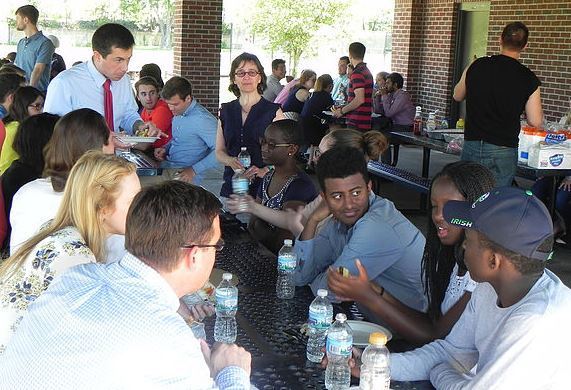 To fulfill this mission, BCe2 continued to host barbecues with SOAR in local parks to increase visibility and communication between the organizations and neighbors. The picnics provide an opportunity to talk about ways to address challenges in the neighborhood and include residents in the decision-making process. BCe2 stepped in to help advertise and promote the events. By the end of the summer of 2017, more than 300 people came to the SOAR picnic to celebrate, meet their neighbors and break bread together.

In addition to these gatherings, Teague says BCe2 members canvassed the neighborhood and surveyed residents on the most pressing issues preventing the area from prospering.

“We walked block by block and took a survey determining that poor lighting was a main issue,” he says.

BCe2 worked with the City of South Bend and homeowners to implement and publicize a pilot program for lighting. Homeowners paid for a portion of the installation and connected the lamp posts to their electrical system while the city paid the remainder. The program provided an affordable way to combat late-night crime while beautifying the area. In April, 30 new lamp posts will be installed.

BCe2 has evolved to include several other pilot programs, including the Vacant Lot Optimization Team. After Mayor Pete Buttigieg’s 1,000 Homes in 1,000 Days program ended, roughly 400 vacant lots remained on the southeast side. The team mapped out their locations and collected data to determine the best use for each space. St. Joseph High School student Marty Kennedy was one of the interns involved with the project. 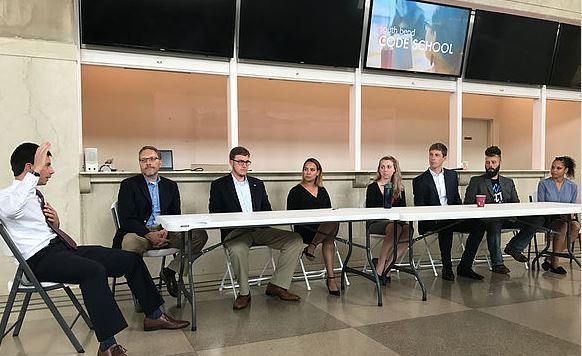 “We would go to these lots and observe the best kind of use for each one, whether that is splitting the lots between two neighbors to increase property value or installing residential housing or building a rain garden,” says Kennedy.

The team presented its information to city officials, who gave them the green light to use the lots as a way to find creative solutions to local problems. From the data, the team found one of the most prevalent issues was basement flooding from excess rainwater.

“We are trying to reduce the human health effects of combined rainwater with sewage backup in a person’s basement,” Gilot says.

BCe2 came up with the environmentally conscious and cost-effective solution of implementing rain gardens filled with native plants. The roots would expand several feet into the ground, soaking up excess rainwater at a quicker rate. By incorporating several gardens near homes and vacant lots, they can prevent excess water from flooding the sewer systems and basements. 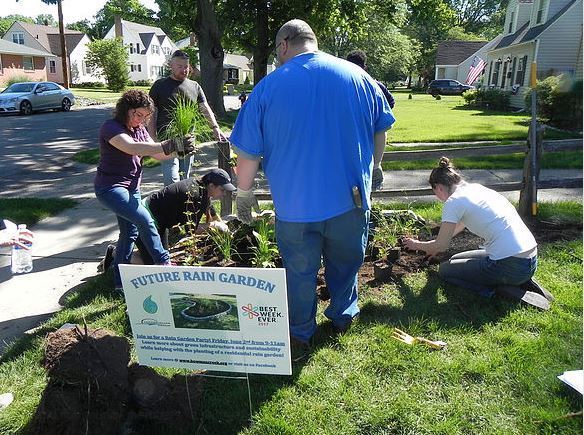 The project has also allowed high school students to get involved with BCe2 through Bowman Creek Academy, a week-long summer program focusing on environmental sustainability and youth empowerment. Kennedy helped establish the program in 2017.

“We created a rain garden at Ivy Tech, which was awesome because it allowed the students to take what they learned and apply it to a tangible project,” he says.

Participants also visited local tree nurseries, learned how to incorporate technology into the projects and had the chance to look at the smart sewer infrastructure in South Bend.

“Going to an academic program like this in the summer is not always the No. 1 thing people want to do,” says Kennedy. “It was very humbling to learn that other people are thinking this way and care about social issues and believe their voice can create change.”

The University of Notre Dame is also capitalizing on the educational impact of BCe2. The site has become the inspiration for a new engineering course.

“The Bowman Creek internship was gaining momentum, and we wanted to start thinking about how we could integrate it into the general curriculum,” says graduate student Maria Krug.

She now teaches the undergraduate Community-Based Engineering Design Projects course through the Center for Social Concerns. In it, students learn how to combine their engineering expertise with a human-centered design. 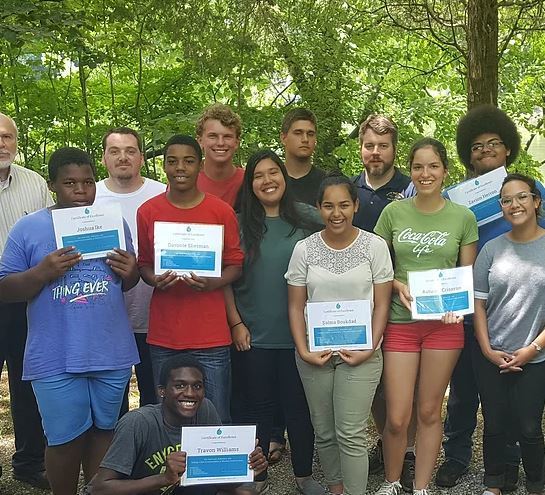 BCe2 has also led to a collaboration with Indiana University South Bend. The two were awarded a grant by the National Science Foundation to study community STEM partnerships. As part of the grant, faculty from the University of Notre Dame’s anthropology program led a team of ethnographers from five schools to analyze the BCe2 program. Throughout the summer they collected data on the relationships between the interns, mentors and the community.

Gabrielle Robinson, a South Bend native and graduate of Indiana University South Bend, spent the summer working with the ethnography team. She says it was rewarding to see the students evolve from the start of their internship to the end. Even more rewarding is how invested they became in the community afterward.

“They embrace the challenge of going into this area that is seen as a conflict-ridden place and they give it something to be proud of,” says Robinson.

As BCe2 continues to gain close alliances with residents, community organizations and the city, members are also subconsciously cleaning up the tarnished reputation South Bend has been trying to rid itself of. Gilot says South Bend has involuntarily become net exporters of talent. Now, the city has opened its doors to technology, sustainability and creativity, leading to job growth. The missing element is making students feel personally connected to the area.

“If we can get their hearts a little more connected to community-engaged work, it makes a lot of difference in whether the talent wants to stay,” he says.

Krug has seen the results for herself.

“We have close to 50 percent of the people who have gone through the summer internship program who end up staying in South Bend,” she says. “It is exciting to see more students who are invested in the city.”

Kennedy says he has also witnessed a renewed pride in his hometown.

“A lot of the rhetoric I was hearing a few years ago was, South Bend is terrible, it is boring and there is nothing here,” he says. “As we have tried to do more things to improve the city and make it better, more people say they love South Bend and want to stay here."

The reach of BCe2 is an impressive feat that has brought together people from all walks of life who may not have interacted otherwise. 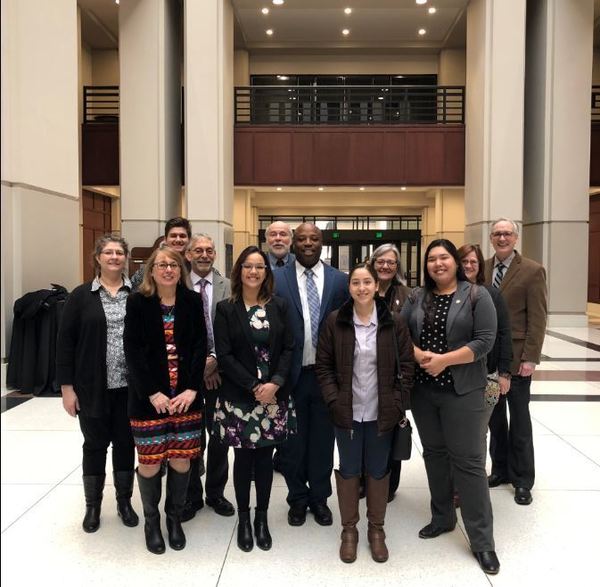 “To see students from all over the world at different universities come together for a united cause and actually see results is amazing,” Teague says.

Krug says the diversity of these collaborations has also enhanced in-classroom learning. Students are now beginning to leave the university bubble and see what is out there.

“That immersive experience for the students is the most important aspect. On a regular basis they are able to go to Ivy Tech and Indiana University South Bend and the city,” she says.

Earning an award that recognizes the importance of these partnerships from the Indiana Department of Education is validation that the group’s hard work is paying off.

“We are very confident in our program but for someone else to acknowledge that, it is something we have been striving towards as long as we’ve been around,” says Boukdad.

As BCe2 looks to the future, it will continue its existing programs and hopes to expand its involvement in lead risk management, affordable housing and community development spaces.

“We will help wherever there are pain points,” says Gilot.

That offer extends beyond the southeast neighborhood. The BCe2 model may soon be replicated on South Bend’s west side.

Of course, the focus will stay the same -- finding sustainable solutions to real-world challenges and, in so doing, empowering residents.

To learn more about the Bowman Creek Educational Ecosystem and its community partners, or to get involved, visit bce2.org.

Originally published by Allison Preston at conductorshare.nd.edu on Feb. 20.