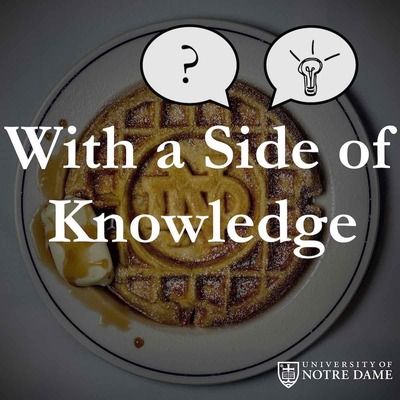 Get the show on Apple Podcasts

Get the show on Google Podcasts

Get the show on Spotify

With a Side of Knowledge is a podcast produced by the Office of the Provost at the University of Notre Dame. It brings listeners informal interviews with fascinating scholars and professionals from both Notre Dame and elsewhere that take place over brunch.

The 13th episode of the show’s third season, “On the Rhodes Scholarship and Making Yourself Useful,” was released Thursday, Feb. 13, and features Prathm Juneja, who this past November was named to the American Rhodes Scholar Class of 2020, becoming the 20th Rhodes Scholar in Notre Dame history.

He talked with host Ted Fox in December—a few weeks after the Rhodes announcement and a week or so before he graduated. Graduating in December isn’t especially common at Notre Dame, and in Juneja’s case, it was because he completed the five-year Reilly Dual Degree Program in Arts and Letters and Engineering in four-and-a-half years. A political science and computer science major, he was also a member of the University’s Glynn Family Honors Program and a College of Arts and Letters Dean’s Fellow.

Shreya Kumar, a faculty member in Notre Dame’s Department of Computer Science and Engineering who wrote one of Juneja’s Rhodes recommendation letters, described him this way in a University news release:

“I have worked with many students who build impressive solutions to common problems, but I have hardly met anyone more dedicated than Prathm to fairness, accessibility and transparency in democracy. He will do great things for this world.”

With an introduction like that, Juneja has every reason to be proud. Yet the way he talks about himself is self-effacing and humble, whether he’s recounting the moment he found out he was a Rhodes Scholar, the research behind his senior thesis on voter registration, or the lesson he learned from his parents.

You can also listen to the episode with Juneja using the player below.