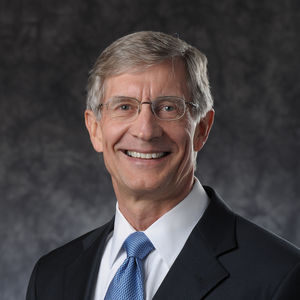 Tom Burish was elected provost of the University of Notre Dame on July 21, 2005, and served in that role through June 30, 2020. He was the fourth person to hold the office since its establishment in 1970. The provost, the University’s second-ranking officer, is elected by the Board of Trustees and, at the direction of the president, exercises overall responsibility for the academic enterprise.

A Notre Dame alumnus and distinguished scholar in the field of clinical psychology, Burish served as president of Washington and Lee University for three years before beginning his tenure at Notre Dame and was Vanderbilt University’s longest-serving provost, holding that post from 1992 to 2002.

“Words cannot adequately express my gratitude and respect for Tom’s outstanding leadership, his visionary leadership of the academy, his commitment to our Catholic mission and his tireless efforts to make Notre Dame a truly great and truly distinctive university,” said Rev. John I. Jenkins, C.S.C., Notre Dame’s president for the entirety of Burish’s time as provost. “Tom has been a transformative provost for Notre Dame, and for 15 years an invaluable colleague.”

After his graduation from Notre Dame in 1972, Burish, a native of Peshtigo, Wisc., received master’s and doctoral degrees in psychology and clinical psychology from the University of Kansas in 1975 and 1976, respectively. While in graduate school, he also worked in the Kansas University Medical Center’s psychiatry department and children’s rehabilitation unit.

In 1976, Burish joined Vanderbilt’s faculty as an assistant professor of psychology. He taught undergraduate courses in abnormal psychology, personality, introduction to delivery of psychological services, stress, and biofeedback as well as graduate courses in psychopathology, health psychology, and clinical practicum. He remained at Vanderbilt for the next 26 years, establishing a prominent reputation in cancer research, receiving honors for excellence as an undergraduate teacher, and serving in numerous administrative positions, including as chair of the Department of Psychology from 1984 to 1986.

A member of the American Cancer Society’s national board of directors from 1991 to 2006, Burish served as its chair from 2004 to 2005. Currently he serves on the board of directors of BioCrossroads, the Beacon Health System, and the Center for Research Libraries.

He is the coauthor or coeditor of four books, including Coping with Chronic Disease: Research and Applications and Cancer, Nutrition, and Eating Behavior: A Biobehavioral Perspective. He also has contributed to more than 15 other books and has written some 70 journal articles in his field.

Burish and his wife, Pamela, have two sons.