A chemist who formerly chaired the department of chemistry at the University of North Carolina at Chapel Hill, Ashby has won several awards for her work, including the National Science Foundation Career Development Award and the DuPont Young Faculty and 3M Young Faculty awards.

Her research focuses on synthetic polymer chemistry, with a present focus on designing and synthesizing materials for biomedical applications such as X-ray contrast agents and drug-delivery materials.

“The purpose of the Cannon Lecture Program is to bring to campus women who are leaders in their fields to share their stories and inspire others,” said Thomas G. Burish, Notre Dame provost, whose office sponsors the series. “An accomplished researcher, teacher and administrator, Dr. Ashby is a shining example of such a person.”

Ashby’s lecture will focus on “impostor syndrome,” a psychological phenomenon in which individuals attribute their accomplishments to luck rather than ability and fear that others will eventually unmask them as frauds.

Specifically, Ashby will talk about her own struggles with impostor syndrome, despite two degrees from North Carolina and multiple postdoctoral fellowships, and about how she learned to overcome the phenomenon, which is common among graduate students. 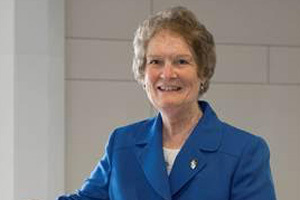 Cannon served as associate provost at Notre Dame from 1990 to 1997, during which time she was instrumental in establishing the Early Childhood Development Center, the University’s first on-campus day care center. She also served as acting director of the Institute for Pastoral and Social Ministry, now the Institute for Church Life, from 1991 to 1992.

As associate dean in the College of Science, she currently advises students in the science-education, science-business and science-computing majors, and is responsible for diversity issues and college election and award committees.

During her time at Notre Dame, Cannon has won several awards, including the Arts and Letters Award of Appreciation and the Dockweiler Award for Excellence in Undergraduate Advising.

The lecture is free and open to the public. Refreshments will be served at a reception to follow the lecture.

Originally published by Erin Blasko at news.nd.edu on September 20, 2018.